Even though the current 911 has been revised a couple of years back, the 991 generation of the car was actually released in 2011. Because of that Porsche is already working on a replacement for the aging model. The new version of the car, which will likely be released with the 2019 Porsche 911, is actually going to be based on a new platform. This hasn’t been confirmed by Porsche but it is quite clear where they are heading. For starters the camouflaged version of the new 911 seen a few months back is both wider and longer than the current car. It also seems to have a longer wheelbase which would give it more interior space and better high speed stability.


The new platform is going to be shared with VAG’s other mid or rear engine cars such as the Audi R8 or Lamborghini’s future V10 car. Despite that, the 911 will retain its rear mounted engine. The new platform will allow Porsche’s engineers to have more suspension mounting points as well as more options when it comes to what engines they can install in the car. The price hasn’t been revealed but all things considered, it is safe to assume the 2019 Porsche 911 will become at least marginally more expensive than the current car. 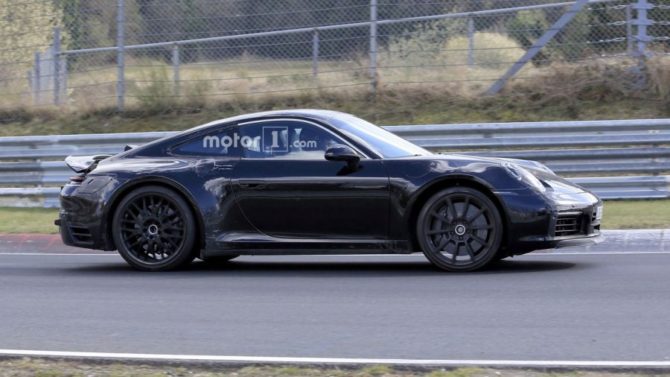 So far we can confirm a few things about the new 911. All the test mules had a more aggressive angle for the front end. This suggests a better drag coefficient and a more aggressive design. On top of that, all the cars seem to have their exhausts further in the middle of the car. The wider track in the rear as well as the longer wheelbase also make for a slightly more muscular design than before. In the rear the cars also seem to boast an LED strip to act as the tail lights. An active rear wing seems to be standard so far while most cars seemed to had 19 inch wheels in the front with 20 inch wheels in the back which is a departure from the squared setup from the outgoing models.

Here the 911 is likely going to retain the 2+2 setup for the seats despite having a longer wheelbase. The overall design of the cabin is more than likely going to be heavily influenced by that of the Panamera sedan. Things like the massive wide-screen infotainment system or wide center stack should be seen in the production 911 as well. There might be some changes on the top end models. These could ditch the already ubiquitous roll-cage due to the fact the chassis made out of a carbon fiber and aluminum blend would be more than just “stiff enough”.

Here the 2019 Porsche 911 will likely retain the same engines as the revised 991.2 generation. The base Carrera will have to do with a twin-turbo 3.0 liter flat-six. The higher end versions such as the S or the GTS will get the same engine displacement but lower inertia turbos as well as different internals. The output is expected to be raised to around 390 horsepower for the Carrera and up to more than 460 horsepower for the GTS. The Turbo version of the car will likely offer north of 600 horsepower in the S trim level. The high performance GT3 and the GT3 RS are both expected to come with a 6 speed manual and rear wheel drive only. These will be the only versions of the 911 to feature a naturally aspirated engine. Some rumors did say that a higher displacement 4.2 liter engine is possible. This would offer more than just 493 horsepower and 339 lb-ft of torque which would make the GT3 so much more fun.

Despite not being revolutionized new 911 won’t come out soon. To be more precise the German automaker doesn’t plan to release it during this year. Yes, it has been spied on numerous occasions, yes it has been seen on Nurburgring, and yes it has undergone the harshest winter tests, but it’s just not ready yet. Porsche won’t rush anything with an iconic model such is this one. That’s why the 2018 Porsche 911 release date is set for spring of next year or maybe even for mid-2018. The vehicle will be sold as 2019 MY.

At what price? We can’t say this at this moment. It’s not yet time to speculate about the cost. As usual, more will be known when the car comes close to its release. Possibly information will be available when the car gets close to its presentation. That’s one thing that we failed to mention. There is a possibility that new 911 will be shown this year, but that also wasn’t confirmed by Stuttgart company. The ongoing version of Porsche 911 starts AT $90,400 which is $5,000 more than 2016 MY. If this trend continues, new 911 could start at $95,000. Stay tuned for more information.