05/16/2017 UPDATE: As you probably already know, 2018 Jeep Grand Cherokee Trackhawk made its debut at 2017 New York Auto Show, and we can already say it is one of the most vivid SUVs ever built. It was created in a way to satisfy each and every performance lover out there completely. Packing a supercharged Hellcat Hemi V8 under the hood, it more than deserves the title of the world’s most powerful SUV.


Jeep was the company that introduced this type of vehicles to the world and was building best of the best SUV’s for years, and now they can boast of having the fastest one. Jeep Grand Cherokee Trachawk is a combination of speed, on-road agility, the luxury of the highest level, and latest technology available to man. 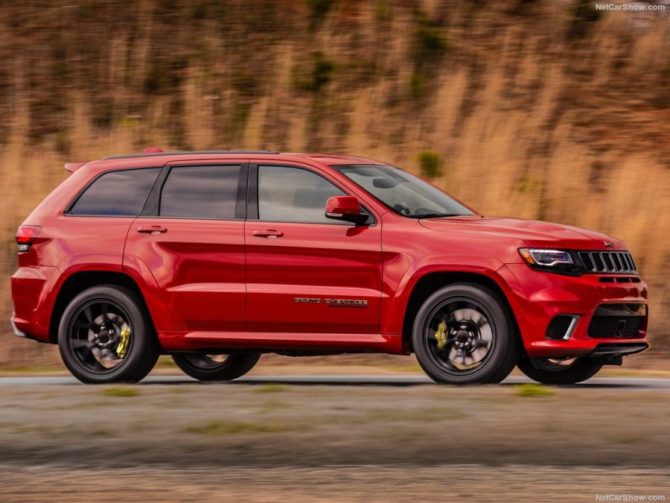 
The focus of this car, despite its satisfying looks, is what lies under the bonnet. 2018 Jeep Grand Cherokee Trackhawk is powered by a 6.2-liter force-fed SRT Hellcat V8. It has the same amount of horsepower as Charger and Challenger Hellcat, and it stands at 707hp while beside it has 654 lb-ft of torque. The transmission available, which draws out the best out of Trackhawk, is a paddle-shift TorqueFlite eight-speed automatic one. This combination elevates this SUV from 0-60 mph in 3.5 seconds and hence ‘the world’s fastest SUV’ title. The quarter mile is covered in 11.6 seconds which ranks it with models such as Dodge Viper or Corvette ZO6. The top speed of 2018 Trackhawk is set at 180mph.

In order to allow you to fully exploit this vehicle Jeep has equipped it with an aluminum suspension which was intensely tuned for Performance and Bilstein adaptive damping. The modes in which you can drive this car are Auto, Sport, Track, Snow and Tow. The Selec-Trap system allows you to shift trough these patterns and to control the deployment of power across the 4WD drive. The wheels available are 20-inch alloy that comes with 295/45 Pirelli Scorpion Verde All-season Performance tires. 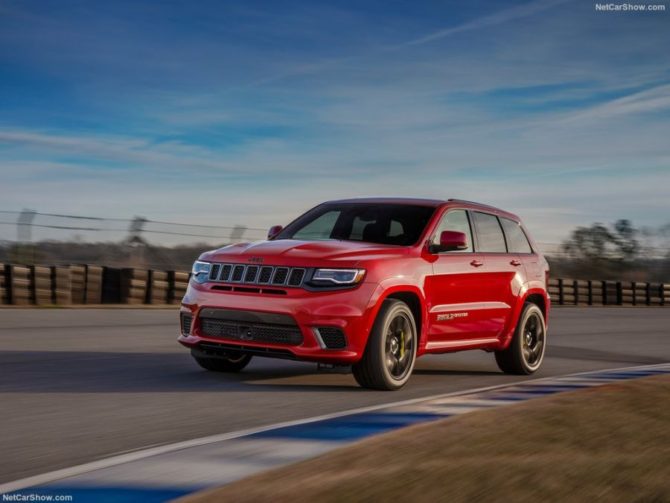 Moving onto the exterior, from the first look you would say that it doesn’t differ too much from regular Grand Cherokee. Worry not, the engineers from Jeep have taken care of that 2018 Jeep Grand Cherokee Trackhawk has more than a few distinct features compared to the standard version. Starting from the front end, we have different headlights (Trackhawk has adaptive bi-xenon headlamps) which are blacked out from outer edges. The place where you have fog lights on regular Grand Cherokee now you have air intakes (Trackhawk’s engine needs cooling, and lots of it). The hood is a bit bulkier, and it features two air extractors also to aid the motor cooling. Fenders and sills now come in the color of the chassis, the exhaust pipes are positioned and shaped differently, and it also features a couple of ‘supercharged’ and ‘Trackhawk’ badges on visible places.

On the inside, you will find a lot of high-quality materials such as Nappa leather, carbon fiber, and aluminum details. The steering wheel is of flat-bottom design, the infotainment system is a Uconnect equipped with an 8.4inch touchscreen, but the cabin also can be customized to personal needs. The reason while we won’t name all safety-driving features is that it has over 70 of those. But nonetheless, we will name just a few that don’t come as a surprise, and those are the adaptive cruise control, blind-spot monitoring, parking sensors, lane-departure warning, and forward-collision warning. Apple CarPlay and Android Auto come as standard.

12/26/2016 Review: Jeep has been contemplating with the idea of releasing performance road-versions of its models for quite some time now. At first there were rumors about a Renegade with as much as 300 horsepower. Unfortunately up to this point they haven’t released it and it seems it won’t be the first. Instead, the 2018 Jeep Grand Cherokee Trackhawk will be the first to wear the new badge. The car has been confirmed a while ago and they even said that it will be vastly different than the SRT. The two will actually share the showroom floor which is quite interesting. So far it seems that the Trackhawk will be a limited edition model released at the end of the life-cycle of the current Grand Cherokee. 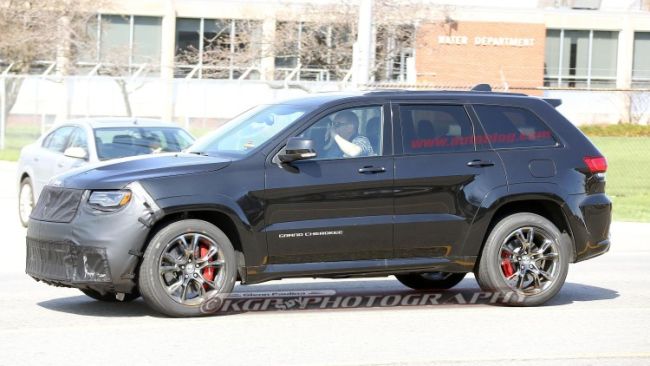 2018 Jeep Grand Cherokee Trackhawk – What is it?

The car will basically be the SUV version of the Hellcat cars. However, there will be quite a few differences between them. For starters, the Grand Cherokee will be the only of the lot to use all wheel drive. This should allow it to become one of the fastest accelerating SUVs ever made as well as one of the fastest. At this point the price or actual release date are not official. Most of us expect the car in the late 2017 with a base price of over $80,000. It would also become Jeep’s most expensive model by a big margin as well. 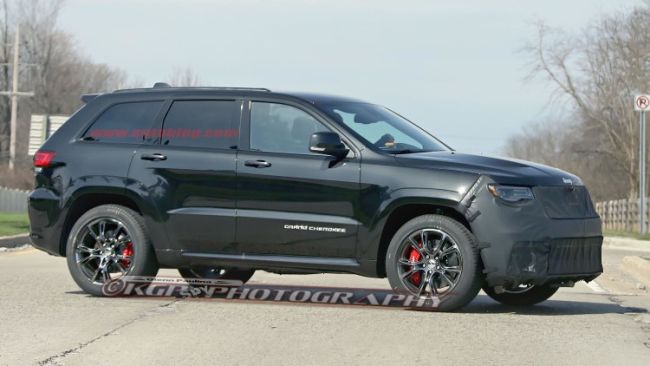 The running gear and drivetrain

Many said that the 2018 Jeep Grand Cherokee Trackhawk would not receive all wheel drive because it would be impossible to route so much power through the driveshafts of the Grand Cherokee. This is not entirely true. The Trackhawk will use a completely redesigned running gear. For starters, the car will get a lower suspension system, beefed up axle components as well as limited slip differential and larger brakes. In fact, from the spy shots we have seen a few days ago it seems that it will actually use carbon-ceramic front disc brakes which is very interesting for this price point. The wheels seem to be as wide as the body can accommodate which is similar to what happens to the last edition of the Challenger.

Under the hood of 2018 Jeep Grand Cherokee Trackhawk

The Trackhawk is definitely going to use a supercharged V8 engine. While Chrysler hasn’t confirmed that it will be using the 6.2 liter Hellcat V8, it is quite clear that it will. The engine is currently capable of 707 horsepower and 650 lb-ft of torque. From the early reports, a 0 to 60 MPH time of 3.5 seconds should be more than possible. Also, the top speed will be well over 150 MPH which is approaching the limits of the Mercedes-based chassis. The transmission will likely be the same eight speed automatic as in the other Hellcat cars. Thanks to all of these, the 2018 Jeep Grand Cherokee Trackhawk will be one of the most insane SUVs ever made for sure. Its limited availability will also assure its owners that the value will go up in time. 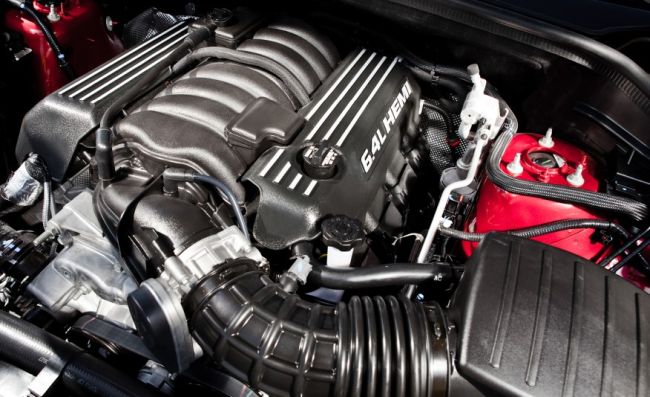 The design, inside and out

So far there have been no reports of its cabin with minor exceptions. We have seen roll-cages in most test mules but this doesn’t mean the production version will get one. However, expect better seats, likely similar to what is available in the other Hellcat products. The exterior seems to be mostly based on the SRT. However, the front end will be new. There seems to be an all new bumper with a much larger opening as well as a small splitter. The grille seems similar to that of the regular SRT while the headlights are identical as well. At the back we expect a new exhausts and more than likely a roof-spoiler and a diffuser.