BMW started the sports crossover craze with the original X6 and since then the market evolved tremendously. In order to cover all market segments they are going to release their third sports crossover with the upcoming 2018 BMW X2. The car hasn’t been officially confirmed by BMW but despite that it has been spied testing on the Nurburgring wearing minimal camouflage. The car seems to be a departure from the usual X6 shape and so far it seems on the right path, at least in terms of design. Its cabin as well as most of the powertrain are likely going to be shared with BMW’s other models which is usually the case.


Just like with the X1, the upcoming X2 will be based on BMW’s UKL chassis. This is a front wheel drive platform which sports a high strength steel construction with a minimal amount of aluminum and composites. Despite that the chassis is very stiff and it sports a low center of gravity, so it is nearly perfect for a sports crossover. The car will likely be released as a compact high performance crossover for a price higher than that of the X1. Expect it to cost north of $35,000 and be very close, at least in terms of price, to the larger X3. 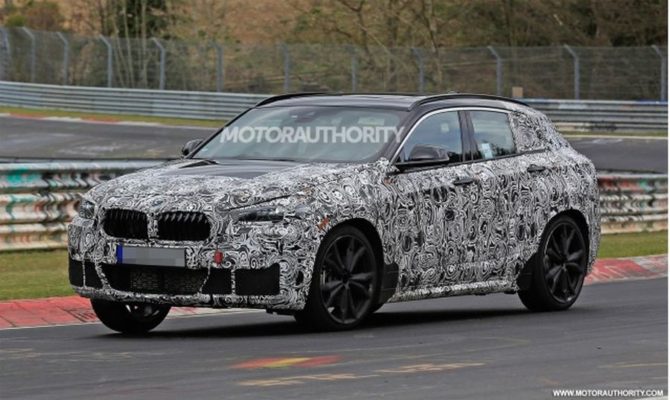 The new X2 BMW for 2018 MY has just begun with the tests, so we are going to wait for it just a bit longer. Well, not just a bit, it is almost half a year away. Early reports suggest that this vehicle will reach the dealerships at the beginning of 2018. Some sources even indicate that after the presentation in Frankfurt (which is the most likely option) Bavarians are going to speed up the process of production in order to launch it in late 2017. As for the price, caranddriver.com suggest that 2018 BMW X2 is going to be priced slightly above his X1 sibling. This means that the starting price for BMW’s latest crossover is going to be in the region of $38,000.

The design of new BMW X2

One of the more impressive features of the 2018 BMW X2 is the way it looks. Even though the car hasn’t been officially unveiled so far, the camouflaged prototype is a definite step up over the X6’s shape. The car no longer looks like a sedan on stilts. Instead BMW decided to scrap that design and give it an all new shape. It now looks a lot closer in design to a high performance shooting brake which is quite unusual for them. The car seems considerably wider than the X1 as well as lower. On top of that the prototype had 19 or 20 inch rims as well as a really low ground clearance. In the back it had a rather small tailgate as well as a raked rear window which are both very close in design to those found on the X2 Concept which was shown in 2016.

Even though so far we didn’t manage to get a good look at the interior, it seems the 2018 BMW X2 will share pretty much everything with the X1. The exception will be the layout of the seats. Some suggested the car may in fact be a four seats model with the rear seats being individual buckets in which case it would be the first to offer this type of design in its class. There will likely be less trunk space than in the X1 but the car will make up for that with more customization options.

The US version of the X2 is expected to hit the market with 2.0 liter turbocharged inline 4 offering 228 horsepower and 258 lb-ft of torque. In Europe the car is expected to receive at least a couple more engine choices. A 1.5 liter turbo-four with over 160 horsepower as well as a more powerful 2.0 liter are more than likely. The car will also receive a 2.0 liter diesel which is known to make anything between 180 and up to 250 horsepower. While the base versions will come with front wheel drive, the others will all get BMW’s xDrive all wheel drive system. An 8 speed automatic will be offered in both markets while Europe will also receive a 6 speed manual on the lesser models. Shortly after launch the X2 is also expected to receive a high performance version sporting the “M” badge and offering north of 300 horsepower.

The ongoing Edge has been released back in 2014 so it is not what we would call a new car. …