05/18/2017 UPDATE: Right after Ford released its Expedition, Lincoln followed suit and 2018 Lincoln Navigator saw the light of the day for the first time. The introduction was done at 2017 New York Auto Show. Before we go into details, let’s go trough some vital information regarding the new generation of Navigator. It is an all-new luxury SUV built on a steel frame construction but with a body of aluminum. Regarding towing and hauling, the US automaker said that it can do more and better than any of the competitors. The unit powering it is a V-6 engine able to produce 450 horsepower. It is mated to a ten-speed automatic transmission with optional all-wheel drive. In the end, it is fully loaded with safety features, high-tech infotainment system, and all-around luxury interior. Now, let’s go into details.


Like we mentioned the 2018 Navigator is built on a high-strength steel frame with the addition of aluminum panels. Thanks to this the SUV is now lighter for 200 lbs in comparison with the previous model. Opinions are that it could be lighter, but Lincoln justified ‘only 200lbs’ weight loss by adding laminated glass which lowers the in-cabin noise. 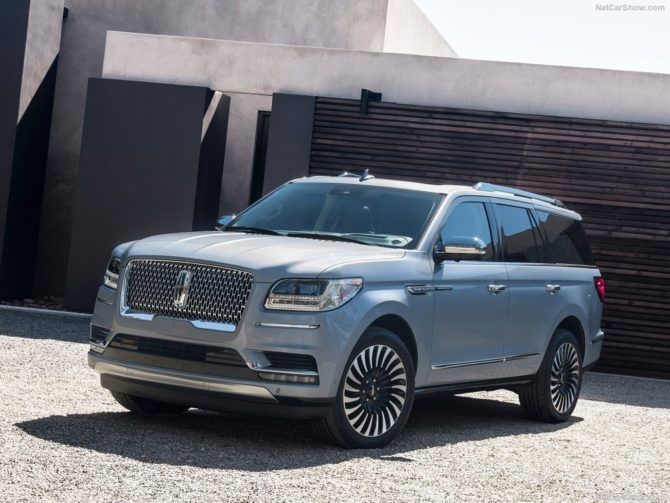 The exterior part of the vehicle is in many aspects similar to the Navigator Concept which debuted a few years ago. One of the most visible differences between the two are of course the lack of gull-wing doors and stair-step rails which were positioned on the side. Rest of the vehicle is built on terms set by Lincoln for all of their models. This includes regular front grille broad and horizontal headlights which all come with Lincoln’s latest design theme.

On the inside, you will find that ‘expensive’ touch. Everything that you can see or feel screams of luxury. In addition to the seats, you will also notice that steering wheel and door handles are all covered in stitched leather. On the middle of the dash, there is a 12-inch all-digital cluster on which you can personalize your needs. The system that new Navigator uses is Sync 3, and it comes with an AppLink smartphone app, Wi-Fi hotspot, Apple CarPlay, and Android Auto. From standard equipment, you will find a 360-degree camera system, parking sensors, trailer assist system, and Adaptive cruise control. From additional features, there are a panoramic sunroof, a Revel II premium sound system boasting 20 speakers and three listening profiles named Stereo, Audience, and On Stage.

Under the hood 2018 Navigator has only one option, but the one which will not disappoint. It is a 3.5-liter twin-turbo V-6. Like we said earlier it can boast 450hp and 500 lb-ft of torque. The gearbox available is ten-speed automatic, and also there is all-wheel drive system. According to the manufacturer, 2018 Lincoln Navigator will be a leader in a segment regarding performance, towing, and fuel efficiency. They are obviously aiming at Cadillac Escalade, and they believe that their horse is good enough for that race.

So in the end, we will state only that the 2018 Lincoln Navigator will go on sale later this year. As far as the price is considered it will not start at $64,000 like it was the case with the previous model. Expect the price to go all up to $74,000 which is in the region of Cadillac Escalade.

01/13/2017 Review: Both Lincoln and Ford about their full size SUV offering which has been around at this point for nearly a full decade. While Ford is usually fine considering the competition, when the Navigator has to compete with the likes of Bentayga or the Range Rover Sport, it doesn’t really look that great for them. A new model is luckily in the works and so far they actually released the concept for the 2018 Lincoln Navigator. The interesting part is that the car looks ready for production with a few exceptions, but more on that later. The new model is still going to use a truck’s chassis, in this case the one from the F-150, but the suspension system will be all new.

In order to maintain the level of luxury most people require at this price point, the Navigator will have to drive like a limousine. The entire suspension system will be redone, likely with a fully independent setup. On top of that, expect the car to boast better engines than its siblings, a much nicer interior as well as a unique design. The price is going to reflect all of that for sure. The current model starts at $64,000 and it seems that the new one could start at over $70,000. The price will be confirmed when the car is going to be released in the late 2017. 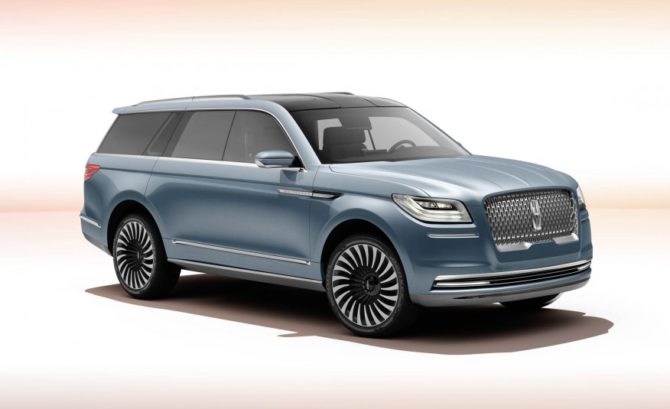 So far we have not only seen the concept for the 2018 Lincoln Navigator but also the prototype for the upcoming Expedition. The interesting part is that the latter has the exact same belt-line and the same sharp angle for the windshield. This mostly means that the concept for the Navigator is a lot closer than we expected. Because of that, it is safe to assume that the front end will likely come with the imposing front grille that debuted on the Continental and with the really subtle headlights. The butterfly doors are just for show on the concept, so the production model will use regular doors. However, the motorized steps on the sides might come to the production version.

Inside the cabin of New Navigator SUV

Here the upcoming Navigator is more than likely going to feature a design mostly inspired by the Continental. The wide center stack on the dashboard with the widescreen LCD screen are already a given at this point. The car might also receive a similar steering wheel and center console with a minimal amount of buttons. The Navigator will offer quite a bit more room and at this point it seems that a seven or eight seats version is a real possibility. The materials will be top of the line across the range and this time around expect its high end versions to go well past $100,000.

We are pretty sure at this point that the 2018 Lincoln Navigator is going to feature a 3.5 liter twin-turbocharged V6, the same found in the new Raptor. This engine will likely make over 400 horsepower and 400 lb-ft of torque in this particular application. All wheel drive will likely remain an option with the base model coming with rear wheel drive. Luckily though, Ford’s brand new 10 speed automatic should be the standard feature on all models. Some also suggested that the new Navigator may receive a lesser version. This may use a smaller 2.7 liter EcoBoost V6 with around 320 to 350 horsepower and up to 350 lb-ft of torque. Even though this is less than before, the performance should be on par with the older model. This would be possible thanks to the much lower weight that will come from the extensive use of aluminum for the body.

There aren’t many luxury SUV’s with Land Rover Range Rover’s feature list, and certainly not many off-roaders like 2016 Range …