The X-Class is an upcoming pickup truck from Mercedes. The truck was first revealed last year and since then Mercedes released quite a bit of information about it. In fact they released an entire video teaser a full month before the official released of the truck which shows how eager they are to fully reveal their new truck. Even though it may seem unusual, the 2018 Mercedes-Benz X-Class is not what you would first think. This is not an entirely new model built from scratch by the German manufacturer. It is in fact built on the same chassis as the Nissan Navara and employs quite a bit of the technology found in this model. In order to make it fit to be a Mercedes though, the X-Class boasts quite a few upgrades over its sibling in order to be able to offer the same standard of comfort and luxury as all the other Mercedes cars on the road.

As we said, the truck is based on the same ladder frame chassis as the Navara. This is a fully boxed in frame made out of high strength steel. The suspension uses a fully independent setup in the front and at the back which is unusual for a truck. Both the front and rear axles get ventilated rotors which is an upgrade over what the Navara has to offer. Also, unlike the Nissan, it seems the 2018 Mercedes-Benz X-Class may boast an optional air suspension system. This would allow the truck to raise or lower itself depending on the speed and it should give it a self-leveling feature which would be really usable on a truck that can carry north of 1,000 pounds in its bed. 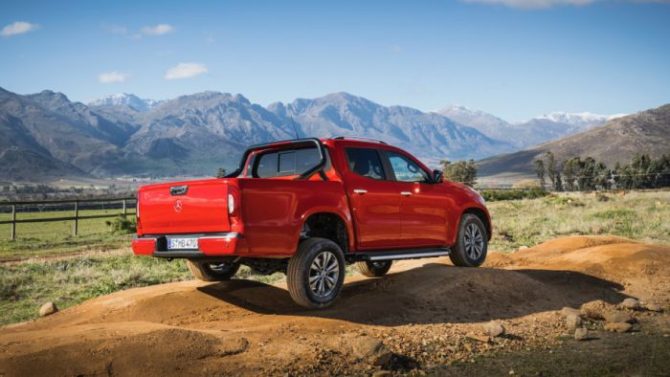 The price is still unknown at this point and despite it was expected to cost well over the price of most other trucks in this class it not the case. According to sources, such is autoexpress.com it will start at $36,000. This is slightly above its main competitors, but? The Mercedes-Benz is a premium manufacturer and X-Class is a premium truck. There aren’t many luxury trucks at this price to begin with. Yes, there are arguments that this pickup will serve more for the show-off than to its actual purpose but we beg to differ. Mercedes will like always bring something new to the market and we can’t wait to see new Mercedes X-Class. The latest teaser gives us a really good idea about the finished design of the X-Class. As we said, it actually shares the same wheelbase as the Navara and it seems to be just as long and as tall. However, the Mercedes is wider in order to offer more room inside the cabin. Its entire design is also brand new. In the front it boasts the same chrome grille and fully LED lit headlights as the GLS which is quite impressive. Its bumper seems to be unique boasting a metal shield right beneath it.

The hood and fenders make it seem quite muscular which is also unusual considering most other trucks on the market. In the rear it boasts vertical LED tail lights very similar to those found on the concept Mercedes revealed a while ago. The truck showcased in the video also had a chrome roll-bar in the bed but this is more than likely an optional extra. Also, the massive 20 to 22 inch rims are expected to be an option or at least available only on the range-topping models.

Most of the dashboard design of the 2018 Mercedes-Benz X-Class is actually expected to be very similar to that found in the concept. Expect it to get the infotainment screen on the dashboard like most other Mercedes cars currently on sale. The AC vents, most of the buttons as well as the steering wheel and its instrument cluster will likely be similar to those found on the C-Class. The end result should be a comfortable truck with better materials and build quality than pretty much any of its rivals. 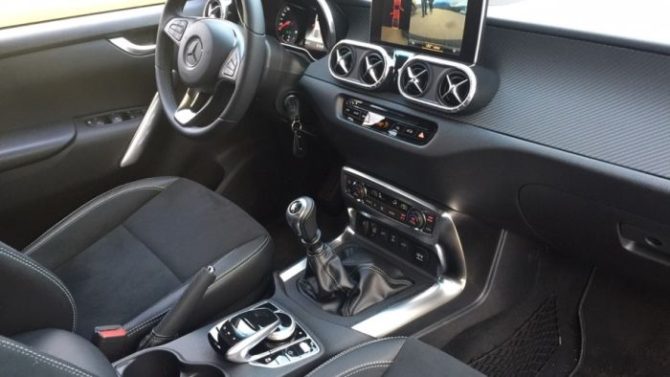 Under the hood of 2018 Mercedes-Benz X-Class

The 2018 Mercedes-Benz X-Class is expected to receive a 2.3 liter twin-turbocharged inline 4 diesel as its base offering. This would be the same engine as the one found in the Navara but in the Mercedes it will likely offer slightly more than 200 horsepower. The higher end models are more than likely going to be equipped with a 3.0 liter turbocharged V6 diesel good for over 261 horsepower and 620Nm of torque. Both of them are expected to be available with an automatic gearbox and all wheel drive. Some markets may also receive rear wheel drive models equipped with manual gearboxes. These are likely going to be available only with the base engine as the V6 would offer just too much torque for a manual gearbox.

European and American car market are quite different, especially when it comes to pickup trucks. Super Duty has been the …