The Jimny has been around in the current configuration for nearly two decades now. The car is still great in off-road but it can’t really hold its own on the road and it isn’t as efficient, or as safe, as it should be. Because of that, most rumors said the car will be discontinued in the near future. However, it looks like these rumors were not true which is interesting. Instead, it looks like the car will receive a massive redesign with the future 2019 Suzuki Jimny. The details about this future vehicle are still scarce but the spy shots do give us a pretty good idea about what to expect.

It looks like most people thought the car will make the switch to a unibody design. This has quite a few advantages as it would make the car lighter, better to drive on the road as well more comfortable. Luckily though it looks like this isn’t the case. Instead, the future Jimny will still use a full ladder frame chassis on top of which a body will be bolted. This is quite clear from the spy shots where the underside of the car is visible. Here we can clearly see a regular solid rear axle, leaf springs in the back as well as what seem to be the actual frame itself. 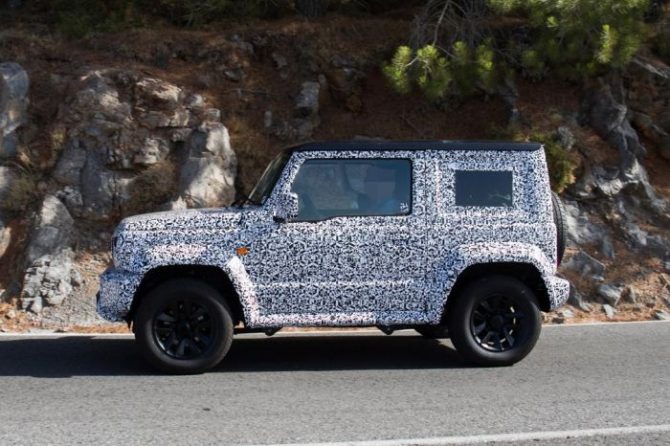 
However, the car is not going to be identical to its predecessor. Instead of using a solid axle in the front it looks like Suzuki made the move to an independent suspension system. On top of that, the car seems to have a slightly wider track than its predecessor and it seems to offer a slightly longer wheelbase as well. Its actual size is not going to change much though. This is because it will still have to comply with Japanese KEY car regulations. It actually looks like the Japanese model will continue to be narrower than the one intended for export which was also the case with the current car.

The Jimny has been on sale, in the same form, more than twenty one year. A life span, than no other vehicle can compare to, but now it has come to an end. The new installment will be introduced during the next year. The sales will begin at an undisclosed date in 2019.

The vehicle will receive major changes on the outside and inside, but it will stay loyal to its roots. The most important factor that this small SUV has are its reliability and its price. The cost of 2019 Suzuki Jimny will stay close to today’s £12,999 ($17,000). The main reason is that they don’t want to upset loyal Jimny buyers. Also, the price must remain in this region in because of this small SUV’s position in Suzuki lineup. Jimny is positioned between new Ignis and larger SUV’s of this Japanese manufacturer. 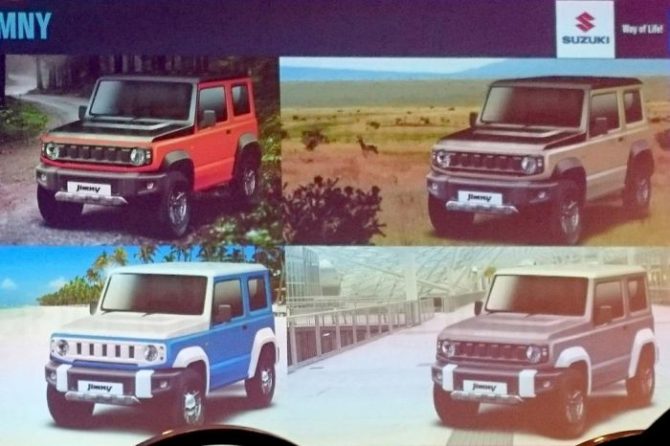 The current vehicle has its unique styling with an aggressive front end, beefed up fenders and a modern-look which still holds true today. The future 2019 Suzuki Jimny on the other hand will change things quite a bit. For starters, the car is going to have a completely new design scheme. This time around Suzuki will offer a more boxy appearance, more similar to the 2nd generation of the Jimny. In the front the usual headlights seem to have been replaced with round ones while the grille has a less curvy appearance. Both the front and rear bumpers also have cutouts which are highly similar to what the army uses on their SUVs while the front and rear fenders are considerably wider than before. The rear-mounted spare rim is still there but thanks to the car’s boxier look, it now looks even better than before.

The interior of new Suzuki Jimny

You would expect the cabin of the new 2019 Suzuki Jimny to be as boxy-looking as the exterior. However, this is not really the case. Instead, the dashboard is considerably cleaner-looking than before which is surprising. The analogue instrument cluster is still there but instead of the really old infotainment system, the new model will boast a rather large, likely an 8 inch screen, infotainment unit with far better hardware and software than before. The interior will still be cramped but the passengers should now enjoy a far nicer set of materials than before. 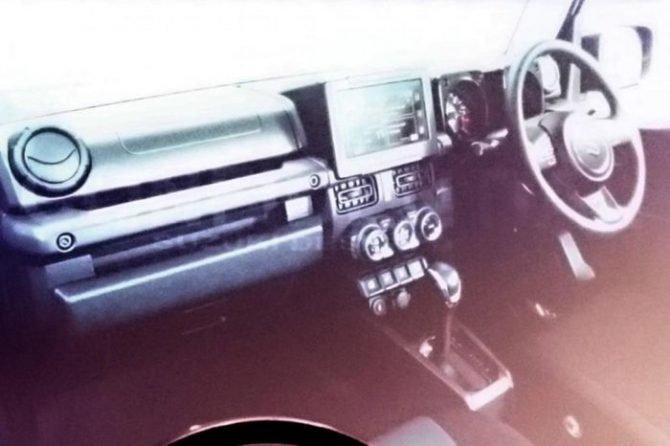 Under the hood – 2019 Suzuki Jimny Specs

The current model is available with a few engines but none of them is really all that efficient. The future 2019 Suzuki Jimny will change all that. The base car is likely going to boas a 1.2 or 1.4 liter naturally aspirated four-cylinder mill good for around 100 horsepower and 100 lb-ft of torque. The option will come in the form of a 1.0 liter turbo-three which should be able to offer around 115 horsepower and over 120 lb-ft of torque. The Japanese market model will still have to comply with their regulations, so it will likely offer a 660cc unit good for around 60 horsepower. All engines will be mated to a 6 speed manual or a possible 5 speed automatic. As before, the car will continue to offer a standard four wheel drive system with a lockable differential.